The reason we considered using the word EXTENDED, was to reflect the fact that in several ways Girvan Folk Festival extends beyond the narrow confines of the May Bank Holiday Weekend.  We have had some local outreach concerts throughout the year; last year we introduced a ‘Linger Longer’ strategy and had a concert in Culzean Castle in the week following the festival; this year we planned to initiate a three-year rolling project with local schools involving storytelling; we chose two themes – Travellers and The Musical links between Scotland and Ireland – anticipating some longer-term collaborations arising from these.  All these plans are impacted by the uncertainty because of coronavirus, but these plans are still very much on the table and we have to believe that we can come out of this stronger for 2021 and beyond.

We also have fledgling twinning relationships with Bromyard Folk Festival and the Johnny Doherty Festival. These take place later in the year and hopefully by that time things will be back to normal. Nothing has yet been arranged, but there might be an opportunity to add a ‘Girvan Flavour’ to those events, with a few more people from Scotland heading south and west.

This is a reminder that the AGM of GIRVAN TRADITIONAL FOLK FESTIVAL is due to take place on 19 AUGUST 2019, at 6pm in The Westcliffe Hotel,  Louisa Drive, Girvan. Girvan Folk Festival is incorporated as a SCIO and registered as a Charity.  The SCIO is responsible for the oversight and Governance of the organisation. Organisation and Management of the annual Folk Festival is delegated to a committee. Plans for the Festival in 2020 are already in progress following on from a Committee / Evaluation meeting. This AGM will be the first Annual General Meeting of the SCIO.

Any notifications can be sent via email to admin@girvanfolkfestival.org.uk  or by post c/o Westcliffe Hotel, Louisa Drive, GIRVAN, KA26 9AH  For further information see the Governance and AGM page on the festival website. girvantraditionalfolkfestival.org.uk/governance/

Girvan Folk Festival 2020 : 1st – 3rd May: The dates for Girvan Folk Festival in 2020 have been set and work is underway on planning and building on what was a very successful festival, our 45th, which took place in May.  Most of the information on the festival website currently still refers to our 2019 festival.  This guest list was very typical of ‘Girvan’ and 2020 promises to be similar with lots of great musical experiences from people firmly rooted in the tradition.  Many people see Girvan as a ‘meeting place’; a chance to see old friends and to rub shoulders with traditional musicians from all ‘airts and pairts’ and within our guests, and visitors, there will be lots of opportunities for people to share in performance for some unique experiences.  Many people attend Girvan year on year, confident that it will be a great weekend. We hope that you might start making your own arrangements to attend early. Meantime please register on our website for email news updates. This will help us to keep you in touch with any developments.

Girvan Folk Festival in cooperation with Culzean Castle is presenting a special concert as part of The Burns Festival Fringe.

Burns and the Tradition: In the footsteps of Jean Redpath. Fiona Ross with Brian Miller Friday 10th May, 7.30 – 9.30 pm.  Tickets £12.50
Culzean Castle, The Round Drawing Room

A very special evening of folk songs from the Scots song tradition. Robert Burns enriched the tradition through his extensive collecting of folk songs and his own writing. Fiona Ross is a Scots singer now living in Australia and Patron of the Melbourne Burns Club. Brian Miller is a singer and instrumentalist with huge experience and respect among folk musicians throughout Scotland.  Jean Redpath, who was Patron of the Burns Bicentenary Festival, performed in The Round Drawing Room at Culzean Castle in 1996 and this special concert brings scots songs to the heart of the Castle, following in Jean’s footsteps. Jean Redpath was a pioneer, who brought the songs of Scotland and of Burns to people throughout the world, and particularly in her adopted home in America. Brian Miller appeared with Jean on Scottish television and together with Fiona Ross is a skilled exponent of Scotland’s rich heritage of music and song. Culzean Castle and the surrounding countryside in Ayrshire is steeped in history and balladry and it the ideal setting for this very special evening.

Tickets for the concert also grants you evening access to Culzean and the Castle.  The evening will be recorded for Radio broadcast after the event.

Not sure how legible this will be, but this is a timetable for Buses serving the outlying villages for festival events. It will be printed in the Festival programme, but it would be good for advance planning if local people were aware of this facility. So if you know anyone this might be helpful to, please point it out to them. 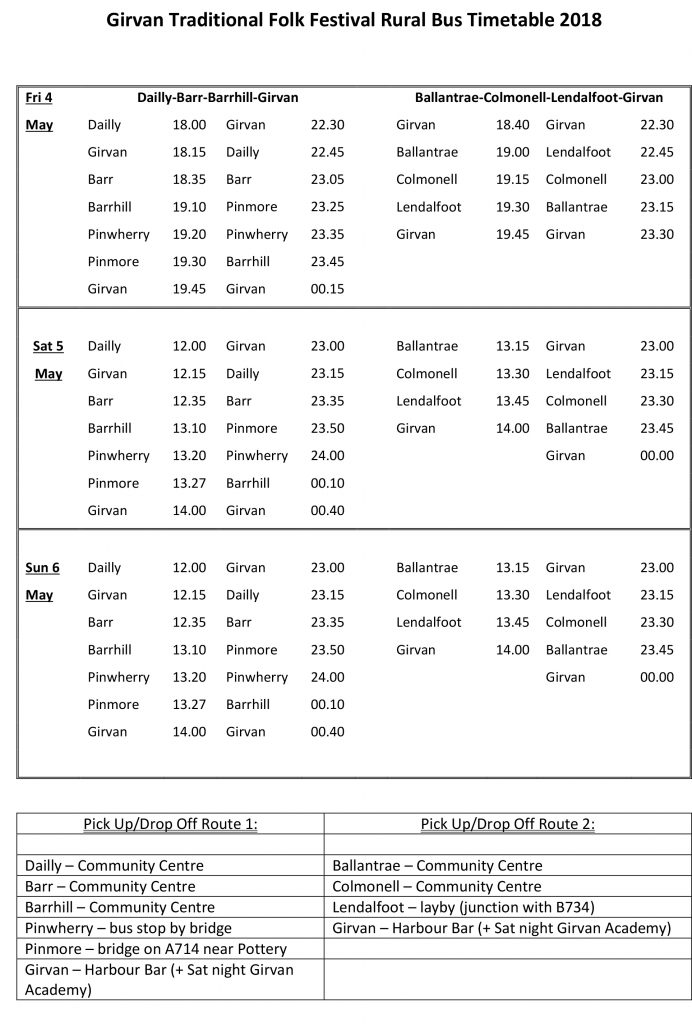 Adam McNaughtan, The legendary Glasgow songwriter whose compositions include The Yellow On The Broom, The Jeely Piece Song, and Oor Hamlet yet again comes out of retirement to grace The Bobby Robb Tribute Concert which last year drew a Saturday afternoon packed house. Attenders are recommended to get along early for the best seats this year. Tickets for this concert are available on the Festival website. Best value is the Weekend Ticket, a Saturday Day Ticket will get you this concert plus other events that day including the evening concert with The Tannahill Weavers. 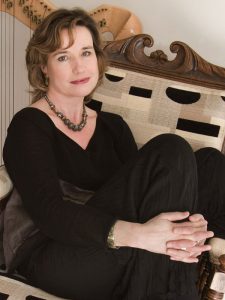 The Girvan Traditional Folk Festival celebrates its 43rd year in style with an exclusive pre-festival taster session at The Gaiety featuring music from Maggie MacInnes, one of Scotland’s foremost Gaelic singers and clarsach players. In 2004 Maggie was voted Best Gaelic Singer of the Year in the BBC Scots Trad Music Awards. She comes from a long line of singers from the island of Barra in the Outer Hebrides of Scotland and has performed in various groups over the years such as Ossian, Fuaim, Eclipse First and The Maggie MacInnes Band, and this evening Maggie will perform with her musician son Calum Park. Also performing will be Eddie Seaman (pipes/whistles) and Luc McNally (guitar/vocals) – two of the five members of the young and talented band Barluath.  The 2018 Girvan Traditional Folk Festival runs from Friday 4th to Sunday 6th May.

Girvan Festival is now constituted as a Charity as part of our strategic plan. It won’t make any immediate differences but it makes sense to us in terms of governance and strategy.

Margaret Bennett will be presenting a talk on songs collected from a Newfoundland singer Jerome Downie.

Want to come to the Festival but put off by the cost of the ferry? Why not leave your car at Belfast or Larne and come over as a foot passenger? If you have bought a weekend ticket and are coming over by boat on the 4th May, we will meet you and transport you to Girvan. Transport will also be available to take you to the ferry on Monday. Contact us by email to register your interest.