Most events from our 2021 continue to be available to view at a time of your choosing – see links below:  We are starting to look forward to our Festival in 2022. Provisional dates are 28th April to 2nd May. 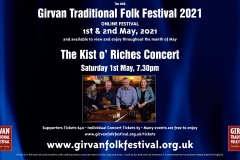 Event 05 – The Bobby Robb Memorial Concert
Historic live recordings featuring Bobby Robb, Adam McNaughtan and Heather Heywood with a backdrop of photographs from the early years of Girvan Folk Festival – This event was originally ticketed but we have now made it available to view. There is an option to make a Donation to the Festival at the end of the Video – but that is at your discretion. Enjoy the concert.
Access  https://vimeo.com/539035461

Event 08 – Documentary Film: Irish Piping in the Traveller Community
A fascinating insight into the piping traditions of the Irish Traveller community. https://vimeo.com/416982259

Event 10 – Documentary Film: From Bad to Verse – Walter McCorrisken
Walter billed himself as Scotland’s Worst Poet. He was a genius. This documentary by Paul Russell has been aired at some film festivals and has its Folk Festival Premiere at Girvan. vimeo.com/539035349

Event 11 – A Word in Your Ear – Remembering Gerald Morgan
A book Launch with poetry readings by members of Girvan Writers Group. vimeo.com/539035326

Event 16 – Documentary Film: Packie Manus Byrne
Packie Byrne was a much-loved character in the English Folk Scene. From Donegal, Packie spent much of his life in England before returning to Ardara, Donegal, in his retirement. This film by Peter Alexander is a heart-warming tale of a legendary character. vimeo.com/416979031

Event 17 – Documentary Film: Wagons by Nick & Mally Dow
This film is presented as part of our exploration of Traveller culture. vimeo.com/416981979

Event 18 – Exhibition: Girvan, Ayrshire and the Clyde Coast
An exhibition of photographs by members of Girvan Camera Club and other Ayrshire Clubs. vimeo.com/539035154

Event 19 – Artie’s Singing Kettle
Artie Trezise brings the songs of The Singing Kettle into your home for a Kettle Sing-a-Long for kids young and old. vimeo.com/542943792

The Following events will come on-stream during the coming weeks and months – keeping the pot boiling as we look forward to our Festival in 2022.

Event 12 – The Muckle Sangs Concert
Muckle Sangs concerts, ‘the big songs’, were a feature of several festivals in the 1990s. We revisit the concept and present some of the ‘big songs’ of the tradition. vimeo.com/539035296

Event 13 – New Songs in the Tradition
Girvan Folk Festival has held competitions over many years for New Writing ‘In the Tradition’. Many of these songs have since entered the tradition and we present a selection of them here.
vimeo.com/539035272

THE FOLLOWING EVENTS WERE DATE & TIME SPECIFIC and have now finished